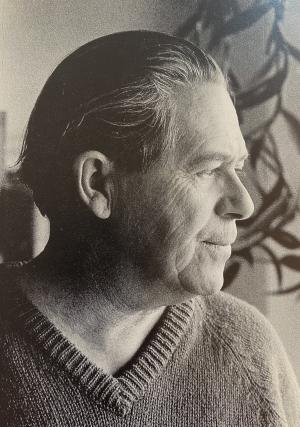 In 1946, Kerr accepted a teaching position at the Vancouver School of Art, and the following year moved to Calgary to head the Art Department at the Provincial Institute of Technology and Art (now Alberta University of the Arts (AUArts) and SAIT). Under his 20-year tenure, Kerr lay the foundation for the Alberta College of Art (AUArts), and had far-reaching influence as an instructor and mentor.

Kerr could not paint full time until his retirement in 1967. Though his proximity to the mountains, foothills and prairie drew his brush as he continued to seek the “answer to Western space with its vast scale, its power of mood rather than tangible forms”. Kerr experimented with abstraction, with colour and brushwork. With increased freedom, and the wisdom of a mature artist, Kerr began to feel satisfaction with his work and the understanding that “the essence of a work of art is the product of a personality”.

In 1973, Kerr was awarded an honorary doctorate from the University of Calgary. In 1975, a retrospective of his work was presented at the gallery of the Alberta College of Art (later renamed the Illingworth Kerr Gallery). This exhibition subsequently toured to Regina and Saskatoon. In 1983, he was named to the Order of Canada. In 1985, a major retrospective of Kerr’s work “Harvest of the Spirit” debuted at the Edmonton Art Gallery before continuing on to nine Canadian cities. In 1947 he became director of the art department (1947-1967) of the Provincial Institute of Technology in Calgary (now the Alberta University of the Arts).*

He was a member of the Royal Canadian Academy, as well.
He died in Calgary in 1989.